Conductive hearing loss is a type of hearing loss that prevents sound from traveling through the ear properly and is often caused by a condition called otosclerosis. This condition has been found in all ages, genders, and races of people. However, it is more common in Caucasian women between the ages of 20 and 45. It may appear as a steady progression of hearing loss during pregnancy. While it can appear spontaneously, approximately 60-percent of cases are hereditary. That being said, our team of otosclerosis doctors in NYC can help.

Symptoms of Otosclerosis Include:

Hearing loss as a result of otosclerosis can begin anytime between ages 15 and 45 but it generally starts in the early 20s. The disease can develop in both men and women but is more common with women. Approximately 60% of otosclerosis cases have a genetic predisposition.

How is Otosclerosis Diagnosed?

To determine if you have otosclerosis, we first give you a hearing test. In some cases a CT scan may be recommended as there are a number of disorders that cause hearing loss.

Why Choose Dr. Neil Sperling for Your Otosclerosis Treatment 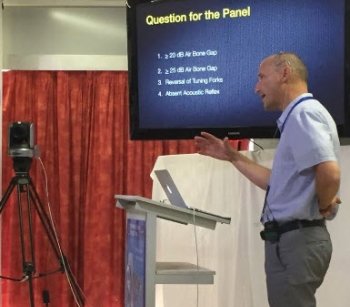 Our primary concern is restoring your hearing. Dr. Sperling has 2 convenient offices in Manhattan. Call today to schedule your appointment with our otosclerosis doctors in NYC.

Life Changing! Due to Otosclerosis I have worn hearing aids over 15 years. During that time I went from a mild loss to a severe loss. In June, 2015 Dr. Sperling performed a stapedoctomy on my left ear. The results are amazing having gotten back about 90% of my hearing. Dr. Sperling’s skill as a surgeon are matched by his compassion and reassuring manner. Although he’s done this procedure countless times, I never felt like just a number. The initial consultation, sitting with me a few minutes before the operation, and personally calling me the day after all proved his dedication and care for his patients. I highly recommend Dr. Sperling and his team and look forward to having the same experience with my right ear in September.

Dr. Sperling performed a Stapedoctomy to treat my Otosclerosis. He made me feel at ease since my first consultation with him. He explained my condition thoroughly and even showed me a power point presentation. On the day of the surgery he met with me right before the surgery to see if I had any questions and just sat by my side for a few minutes, which was very comforting. Once the Surgery was completed he took the time to go to a different floor to find my wife to let her know that everything went well. The day after the surgery he called me himself to see how I was feeling. On top of this great experience I was able to hear again!!!

Who is at risk for Otosclerosis?

The precise cause of otosclerosis is not fully understood but it does tend to run in families and can be hereditary. If your family has a history of otosclerosis then you are more likely to develop this disorder. This type of hearing disorder only affects the ears. Both ears tend to be involved to some extent although some individuals only experience hearing loss in one ear. Otosclerosis usually begins in the teens or early twenties.

How does Dr. Sperling treat Otosclerosis?

The good news is that conductive hearing loss due to otosclerosis is reversible, in most cases, with a surgical procedure known as a laser stapedotomy. Part of the Stapes is removed and replaced with a prosthesis that, once in place, allows the bones of the middle ear to move properly, thus restoring conductive function to the ear.

Dr. Sperling uses a specialized laser stapedotomy technique that includes vein grafting in order to eliminate post-operative vertigo, which is common after more traditional stapedectomy procedures. This technique is 90 percent to 95 percent effective at restoring the ability to hear, often immediately after surgery.

As an alternative to stapedectomy (surgery), traditional hearing aids can correct the hearing loss associated with otosclerosis. In some cases, a sodium fluoride treatment may also be prescribed to slow the progression of the disease.

Otosclerosis is most often caused when one of the bones in the middle ear, the stapes, becomes stuck in place causing the bone to be unable to vibrate. As a result, sound is unable to travel through the ear and hearing becomes impaired.

What are all the treatment options for Otosclerosis?

There are 3 main treatment options for Otosclerosis:

What is the success rate for treating Otosclerosis with surgery?

The chances of obtaining a good result from stapedectomy surgery is about 90% meaning that about 9 out of 10 patients will have improvement in their hearing up to the level at which the inner ear is capable of functioning. Dr. Sperling has a high success rate for this type of surgical procedure and has performed over 1,000 stapedectomy surgeries.

If you have been diagnosed with Otosclerosis or believe you have this type of hearing loss, call our office today to schedule your appointment with Dr. Sperling.

We offer treatment of ear and hearing conditions including:

We offer surgical treatment of the ear including:

Otosclerosis can result in conductive hearing loss for patients, but is reversible in most cases.

Surgery for otosclerosis can have an enormous impact on quality of life.

What Sets Us Apart?