Treatment by the Leading Ear Infection Doctor in NYC

Ear infections (Otitis Media) are the most common childhood illness for which antibiotics are prescribed. “Otitis” means inflammation of the ear, and “media” means middle. Anyone who has had a child with this problem knows how painful it can be. High fevers and lying down make the pain worse, making it difficult to sleep. If this is the case, be sure to contact an ear infection doctor in NYC immediately.

Ear infections are often the result of a cold, which spreads and settles in the middle ear and can be the result of both bacteria and viruses. Fluid accumulates in the middle ear, causing inflammation and pressure. Symptoms can include fever, piercing pain, trouble hearing, dizziness, and fluid drainage. Ear infections can sometimes clear up on their own, but if symptoms persist for several days, see your doctor.

In adults, Otitis Media can also be very uncomfortable. Prolonged ear infections can also lead to hearing loss. If you experience hearing loss for any length of time, come in for a consultation. 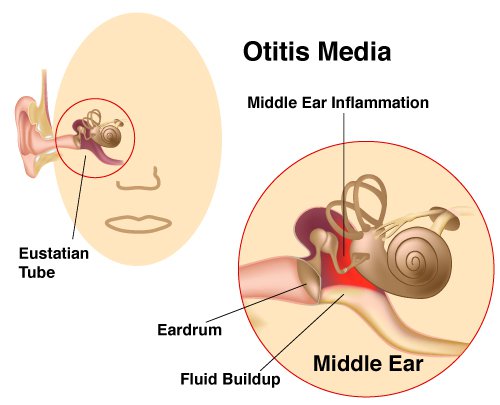 Otitis media can be serious since it is an infection that has the potential to spread. It may cause ear pain and hearing loss. Hearing loss, especially in children, may impair learning capacity and even delay speech development. However, if it is treated promptly and effectively, hearing can almost always be restored to normal. Otitis media is also serious because the infection can spread to nearby structures in the head, especially the mastoid. (see the symptoms list) Immediate attention from your doctor is the best action.

HOW DOES THE EAR WORK?

The outer ear collects sounds. The middle ear is a pea-sized, air-filled cavity separated from the outer ear by the paper-thin eardrum. Inside the middle ear are three tiny ear bones. When sound waves strike the eardrum, it vibrates and sets the bones in motion that transmit to the inner ear. The inner ear converts vibrations to electrical signals and sends these signals to the brain. A healthy middle ear has the same atmospheric pressure as air outside of the ear, allowing free vibration. Air enters the middle ear through the narrow Eustachian tube that connects the back of the nose to the ear.

Blockage of the Eustachian tube during a cold, allergy, or upper respiratory infection, and the presence of bacteria or viruses lead to a build-up of pus and mucus behind the eardrum. This infection is called acute otitis media. The build-up of pressurized pus in the middle ear causes pain, swelling, and redness. Since the eardrum cannot vibrate properly, hearing problems may occur. Sometimes the eardrum ruptures, and pus drains out of the ear. More commonly, however, the pus and mucus remain in the middle ear due to the swollen and inflamed Eustachian tube. This is called middle ear effusion or serous otitis media. Often after the acute infection has passed, the effusion remains lasting for weeks, months, or even years. This condition may incite recurrences of the acute infection and may cause difficulty in hearing.

WHAT WILL HAPPEN AT THE DOCTOR’S OFFICE?

During an examination, our ear infection doctor in NYC will use an otoscope or microscope to look at and assess the ear. The doctor checks for redness in the ear, and/or fluid behind the eardrum, and to see if the eardrum moves. These are the signs of an ear infection. Two other tests may also be performed:

HOW SHOULD MEDICATION BE TAKEN?

It is important that all the medications be taken as directed and that you keep any follow-up visits. Often, antibiotics to fight the infection will make the earache go away rapidly, but the infection may need more time to clear up. Other medications that your doctor may prescribe include an antihistamine (for allergies), a decongestant (especially with a cold), or both. Sometimes the doctor may recommend a medication to reduce fever and/or pain. Special ear drops can ease the pain. Call your doctor if you have any questions about yours or your child’s medication, or if symptoms do not clear.

WHAT OTHER TREATMENT MAY BE NECESSARY?

If your child experiences multiple episodes of acute otitis media within a short time, or hearing loss, or chronic otitis media lasts for more than three months, your physician may recommend referral to an otolaryngologist for placement of ventilation tubes, also called pressure-equalization (PE) tubes. This is a short surgical procedure in which a small incision is made in the eardrum, any fluid is suctioned out, and a tube is placed in the eardrum. This tube eventually will fall out on its own and the eardrum heals. There is usually an improvement in hearing and a decrease in further infections with PE tube placement.

Otitis media may recur as a result of chronically infected adenoids and tonsils. If this becomes a problem, your doctor may recommend the removal of one or both. This can be done at the same time as ventilation tubes are inserted.

WHAT ARE THE SYMPTOMS?

In infants and toddlers, look for: Pulling or scratching at the ear, especially if accompanied by other symptoms; hearing problems; crying, irritability; fever; ear drainage.

Remember, without proper treatment by a hearing disorder specialist, damage from an ear infection can cause chronic or permanent hearing loss.

We offer treatment of ear and hearing conditions including:

We offer surgical treatment of the ear including:

Otosclerosis can result in conductive hearing loss for patients, but is reversible in most cases.

Surgery for otosclerosis can have an enormous impact on quality of life.

What Sets Us Apart?